Join the action in 2 of the most famous rooms in Hogwarts! In the Chamber of Secrets, Harry Potter is battling Tom Riddle and the giant Basilisk. In the Great Hall the sorting hat and other magical accessories are ready to use. There’s excitement (and Cornish pixies!) everywhere. There are special treats too: an exclusive, golden, anniversary Voldemort minifigure and 6 random wizard card tiles.

This versatile set includes well-known rooms, enchanting features and familiar characters from the Harry Potter movies. The Great Hall contains 2 long tables, Dumbledore’s golden-owl lectern and authentic accessories, such as the sorting hat. Just like in the movies, the Chamber of Secrets has an iconic circular entrance and a large statue with an opening mouth, which reveals a corridor from where the Basilisk snake enters the room. 10 minifigures are included to inspire imaginative play-and-display possibilities: Harry Potter, Ginny Weasley, Tom Riddle, Colin Creevey, Justin Finch-Fletchley, Luna Lovegood, Gilderoy Lockhart, Albus Dumbledore, Professor Sinistra and Nearly Headless Nick. There are collectible treats too: an exclusive, golden, anniversary Voldemort minifigure and 6 random wizard card tiles. 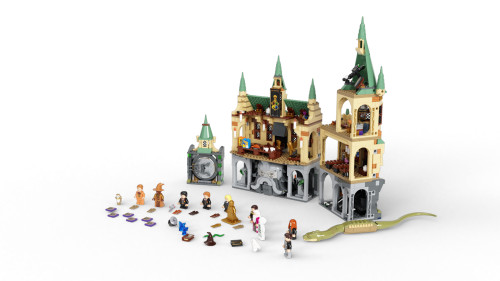