Ticket to Ride:  United Kingdom will include a double-sided game board.  One side will show a map of the United Kingdom, including Great Britain and Ireland, set in the 19th Century, at the dawn of the railroad revolution.  To play on this map, a completely new set of train cards are also included.  A unique feature of this scenario is the introduction of Technology cards that allow players to improve the quality and sophistication of their trains during the game, allowing faster runs and longer routes.  Players must use Locomotive cards to purchase the Technology cards, forcing them to decide between technological development or expanding their route network on the map.  This scenario supports 2 to 4 players. The other side of the game board shows a map of Pennsylvania.  Playing this scenario uses a deck of Stock Shares, representing actual historical railroads that operated in the region shown on the map.  When a player completes a route on the map, they have the opportunity to "invest" in a company through the use of the Stock Shares, with control of each company awarding bonus points at the end of the game. For ages 8+; 2-4 players; Playtime: 30-60 mins 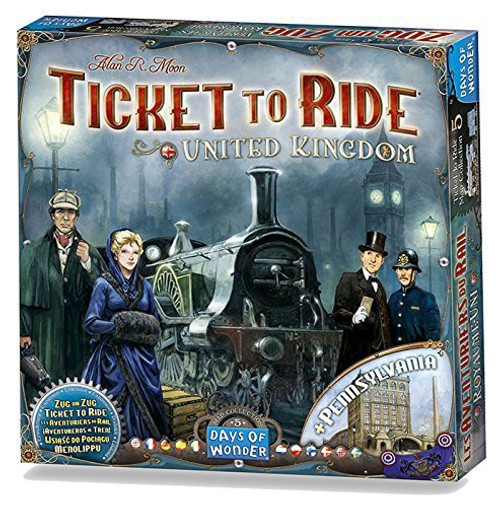